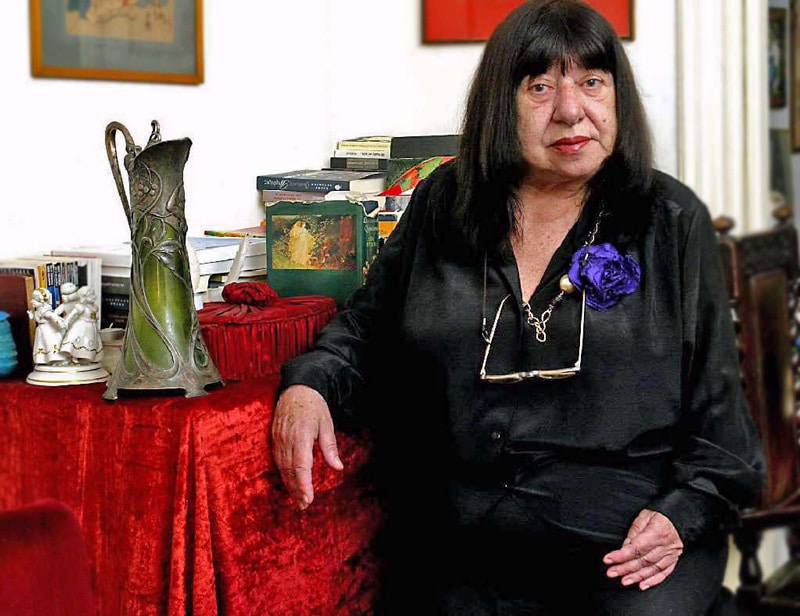 She fell in love with Rodney Rooke, a philologist from England. They got married within three weeks and stayed together until death — he in 2005, and she in 2020. There was nothing to separate them.

When she was still in high school and her poetic pen was screaming, Nikos Kazantzakis, who was her spiritual father, was dazzled by the beauty and truth in her writing. In 1956 he even sent a letter to the newspaper Καινούρια Εποχή (Kainourgia Epoche; ‘New Season’) whose exact words read ‘Please, publish this poem, it was written by a girl who has not yet graduated from high school. It’s the most beautiful poem I’ve ever read!’

The first line of her first book Λύκοι και Σύννεφα / Wolves and Clouds (1963) foreshadows the path that this poet will follow uninterruptedly until her death:

In the sixteen collections she published, from 1963 to 2018, Anghelaki-Rooke does nothing more and nothing less than tell the story of her body. The flesh, the intestines, the heart, the legs, the eyes, the head, the abdomen, the armpits, the navel, the breasts, the pelvis, the sweat — all are named, described, mythologised, glorified and mourned. The body is the source of poetic inspiration, but also the driving force of thought, as well as its main object, the starting point of every emotion and every ascension:

Paradise is won
with the body
and he is also mortal

Such a bodily poetry can only be dominated by two themes: love, first of all, which is the glorification of the flesh, which is the miracle of daily immortality, which is ‘the only divine gaze / that will fall on us / the unbelievers’* and the other, death, the trauma of final disappearance, time and its impact:

The issue is one
the personal body
and its faceless loss

(‘It Appeared in Other Poems Too’, Ωραία Έρημος η Σάρκα / The Beautiful Desert of the Flesh, 1996)

As the years go by, the poet with the same sincerity, expressive simplicity and verbal boldness, who for decades spoke and described lust and pleasure, erotic lack and loneliness, speaks more and more about the decay of the body and the perpetrator, Time. Even if it is difficult for the body to accept it without future definitions, even if it is difficult to imagine a poetry beyond the body. Anghelaki-Rooke tries to see reality: ‘Look,’ she says in the aforementioned Provocateur interview, ‘Now more naked than a whole life filled of love.’ The poet discovers that loneliness is now impersonal, has no specific form to fill, and is an absence where everyone and everything is missing. The new emptiness she experiences is truly and definitively empty:

Even the body is now lost, and instead of liberating the soul brings it to its knees, because it has nothing to offer but survival.

In her final years as a poet, Anghelaki-Rooke circles back to the world she lived in and wrote about. She does not regret or reconsider. She knows that she has changed, that her body has changed and, consequently, her outlook on things has also changed. She writes about concepts such as dignity, fame, the importance of detail, the true value of repetition, the love that ‘makes the world’** despite its fragility.

She also converses with her old poems, admits her delusions and failures. She once wrote, perhaps to console us for the passage of time, that ‘whatever loses in touch / gains in substance.’+ However, towards the end she capitulates – she knows ‘touch is the essence.’++ Earlier on, she took pride in translating the end of life into love and thereby turning death into her muse. But now, she says, ‘no muse visits’.t Inspiration, she notes, is elsewhere; once it was the future and what it can bring. Now her inspiration is what has been finally lost: ‘The only thing left is the present, the absolute ruler,’ she says.tt And in the present continuous, she wins with all the poems she has gifted us – poems that may well justify those who for years considered Katerina Anghelaki-Rooke one of the most important living poets in Greece of our times.

I pass my life
through the eye of the same rusty
old needle
and I sew, I sew my passion.
The wrinkles on my belly
like city streets
the square with its obelisk
everything familiar
and myself familiar but ignorant.
I only know myself in sex
and what defeats me in sex —
a cliché that sings.
Tricked out with the seasons
I switch dresses
and the body
changes shapes
with the weather
I blow it up each morning
and the balloon-vendor takes off
with the pump.

I begin with an itching in the middle
of the palm
a nail or a brutal fly
whose triangular snout rubs against
the dark counterpart
the fear — like the root’s fear —
that the air will rot
that earth will harden
that the end will take root.
And look, I’m playing jump-rope in the sky
I’m eating with the fiends
masqueraded as cows with
grassy dreams
I plan to prove nothing with my life
that’s why I fell in love with you
I, a mammal of a future
prehistory
poisoned from so much sperm
I ruminate on the futile words
of my act
— always play-acting as if I were to
die soon —
that’s why I fell in love with you.
Our time is short
we’ll both survive
the unailing
I, dragging
my time-wrecked body
and you, always beaming
steeped in
childlike songs
— Christ,
you’re beautiful
and your name is hard
like resin
but everything else about you
is soft.
Your heart roves
like the sea
around all the islands.

The cranes in the harbor
are lugging up the night
little feathered clouds
of the holy hen
open up the day to the waters.
On the deserted pier
I wait—a hunk of darkness
cut out of dark rock
I wait to be taken in a dark carriage
or else break with light.
There’s always some soft spot
on this earth
for us homeless
in the final moment.
There was no resurrection for us
no resistance
there was no act
we just roosted
hopelessly bundled up in cloths
too cumbersome for lovemaking
moaning faintly through damp noses
frozen in the chill.
You’ll head for the skies
as if you had no body
you’ll go up in light
in spite of dreaming the photographer’s darkroom.
You’re going off to the nightingale’s winters
and I spread you out with my fingers
a shadow on the eucalyptus-lined street.
I press my whole body
on your whole body
and I try to believe in your death
— As for my own . . . it is difficult —
the way the yellow darkens
in the dusk
when the hidden smell hits you
and the flower is only a stigma.
The green almond will ripen
passion will turn into belief
in time . . .
Belief nests inside me
with minute movements I love
what is
and what can never be.
What a marvelous affair
the burning bush!
It’s forever burning
in a landscape just like my skin
something between desolate yellow
and the mute green of fertility.
I suffer. I suffer with
the whole world
suddenly the truth is clear
in the words of the dead.
I press your navel
and I expand emptiness.
Through sex I learn
what a burden you’ll always be carrying
— god or stranger —
And I take your body
I take your watered-down blood
I’m ravaged by so many contradictions
I worship the enchantment
the traces of your teeth
on our old apple.
I am a hollow
fragrant with incense
what you are is forever
what I am ends here
here I stay
a matchless footprint
in the divine endlessness. 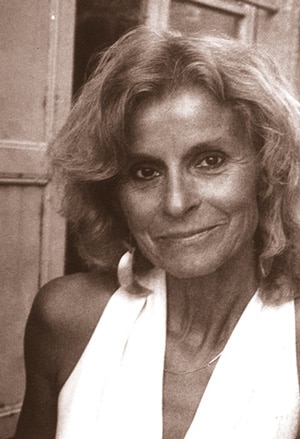 Eleni Fourtouni is a Greek translator, poet and writer. She has written about the role of women in the Greek resistance and progressive movement.

September noon
small talk of the comrades
in the gentle sunshine.
The afternoon colors prepare
autumnal steps.
The joy my fate: death
peace is the miracle
that mercilessly precedes. 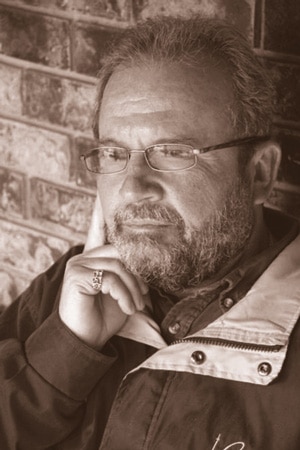 Manolis Aligizakis is a Greek-Canadian poet, author and translator. He is one of the most prolific writers of the Greek diaspora.

We were making plans for
our death tonight
and it was as if guessing
the songs and the fishermen
distancing themselves from the shore.

The glance of the sun might be bold
or the roots of ancient trees
would enclose ever tightly
or would we sink in endless waters
with the weight of the days?

Metal clatter and chirps
of wounded birds high up in the air
sea made of wheat
or would we die
of the many sunflowers?

Each time an act ends
humans feel the need
to write an epilogue
on paper or in the heart.
What was created by the mind
like lightening wants to shine
in the heaven of creation, to last
even if only in one small corner of history.
I find myself at that time of life
where I should “epilogue”
but I feel my past disappear
leaving only faint tastes and images
with no explanation.
The wind is there, though,
sometimes wild, sometimes cool,
carrying with it storms or calm.
Yes, the wind is the right epilogue
to a complete life
which, of course, when asked why
has no answer. 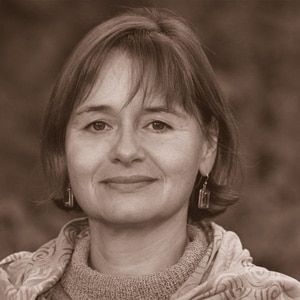 Karen Van Dyck is an academic and teaches Hellenic Studies and Comparative Literature. She is an author and translator.

Poems can’t be
beautiful
when truth has turned ugly.
Experience now
is the only body of the poems
and as experience is enriched
the poem finds nourishment
and it might become strong.
My knees hurt and I can’t
kneel before poetry anymore
I can only gift it with
my experienced wounds.
The adjectives wilted
I can only use my imagination
to embellish poetry.
Yet I shall always serve it
as long as it too wishes
as only poetry makes me forget
the enclosed horizon of my future.