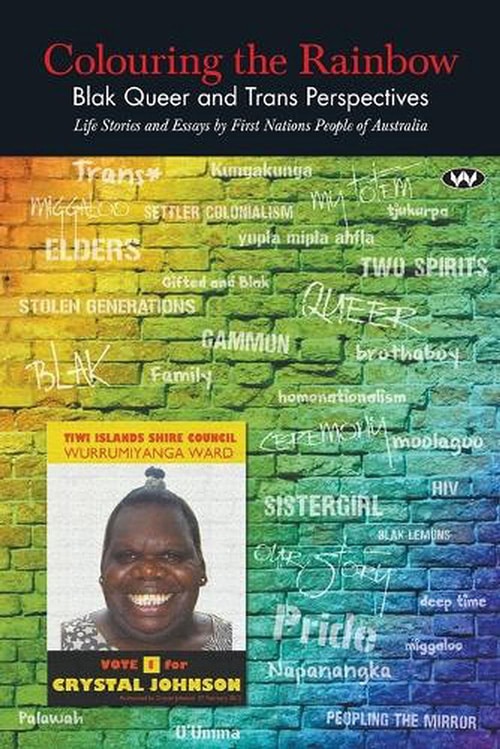 This review refers by name to Aboriginal and Torres Strait Islander people who have passed.

The life stories and essays in this anthology are bound together in several ways, for instance in their unflinching sharing of trauma and their many demonstrations of the courage required to overcome the effects of trauma. Authors describe their experiences of violence, often of an extreme nature. Some write about losing loved ones to the consequences of homophobia or transphobia. But trauma is not the defining feature of this collection. There is commonality also in the generosity of spirit which flows from the first story, by Tiwi Elder and sistergirl Crystal Johnson. In ‘Napanangka: The True Power of Being Proud’, there is unthinkable violence, but there is also joy, forgiveness and pride. ‘I say to people: “Yes, I am a sistergirl. Yes, I am an Elder. I earned that respect. I earned that title. I got that respect.”’ This respect is evident in the second story, by Brie Ngala Curtis, who recalls first meeting Johnson as an eight year old, and continuing to learn from her as an adult:

She’s got a very powerful, prophetic voice – she’s very articulate with her words – making, advocating and bringing awareness, and giving strength to sistergirls or trans or gay and lesbians living in remote communities. Yeah, she’s the first transgender to enter a shire or political government in Australia. I think she’s done a lot of sistergirls proud when she did that. I look up to her a lot.

Each contributor demonstrates a commitment to sharing stories as a form of activism, teaching and care. In so doing, they offer readers who may be struggling a lifeline, a strong rope, like the one R.J. Sailor describes: ‘Everything I have done since I left home as a gay man is a piece of string. Every experience is string woven into rope and that rope pulls along many people from down the back where they grab onto it.’ The anthology also offers help of a material kind, with author royalties donated to ANTHYM: Aboriginal and Torres Strait Islander HIV Youth Mob.

Colouring the Rainbow, begins by acknowledging as a source text an older scholarly effort to open up a discussion about ‘lesbian and gay Aboriginal history’. In that essay, ‘Peopling the Empty Mirror’ (1994), the co-authors quote Adrienne Rich on the effects of identity erasure: ‘when somebody with the authority of a teacher, say, describes the world and you are not in it, there is a moment of psychic disequilibrium, as if you looked into a mirror and saw nothing.’

In Colouring the Rainbow, Hodge continues the work he commenced as one of the collaborators on that original essay, bringing together prominent First Nations cultural leaders, writers and storytellers, public health professionals and academics to offer their diverse perspectives ‘and to reflect upon epistemology and notions of recording and interpreting history.’ The stories recuperate voices, world-views and identities from the silences of official historical narratives and, in so doing, demonstrate that the mirror was never empty.

We will never know the true extent of homosexual and gender diverse cultures in pre-invasion Australia. Colonial accounts quoted in ‘Peopling the Empty Mirror’, offer little in terms of real understanding, given that the secret and sacred would have been hidden from outsiders, especially British colonisers seeking to impose their anti-homosexuality laws alongside religious and cultural beliefs.

It is difficult to gauge pre-invasion attitudes to same sex relationships, gender diversity and other forms of queer identity because of the devastating effects of Christianity. As ANU lecturer and Stolen Generations survivor Samia Goudie observes, ‘the strong mission enculturation experienced by many in the Community resulted in a tendency to express the same views.’ In his heartrending personal essay, ‘Atonement’, Ben Gertz makes a similar point, noting the disjuncture between two core parts of his identity: ‘My family [. . .] taught me to feel strong and proud about my culture. However, unlike my culture, my sexuality was something relatively new in my life and I was never taught to be proud of my sexuality.’ Like Goudie and Gertz, many contributors describe the dual effects of exclusion and marginalisation from two worlds – from largely non-Indigenous queer communities and from predominantly heteronormative (and often religious) traditional cultures.

And yet, as Professor Sandy O’Sullivan notes, the ‘common rhetoric [. . .] that alternative sexualities and non-dyadic gender performance were manifestations of Western influence on our traditional Aboriginal cultures’ is too simple. It doesn’t stand up to scrutiny. Queer and gender diverse people have always existed in Aboriginal and Torres Strait Islander cultures, as they have in cultures all over the world. And though many contributors recall moments of rejection by families citing tradition and culture as barriers to acceptance of queer identities, others emphasise an intergenerational knowledge which challenges the ‘common rhetoric’. Ngala Curtis, for example, recalls her grandmother telling her that ‘there were always sistergirls in Aboriginal culture and there always were trans people long before European settlement in Australia.’ Colouring the Rainbow, as O’Sullivan notes, is an important contribution to the continuing work of ‘context and historical correction’, which seeks to combat queer erasure within First Nations communities and outside of them.

Many of the contributors note that First Nations People who also identify as LGBT+ often spend their lives negotiating the tension between cultural and sexual/gender identifications. It is important to note that this tension is structural, and must be addressed as such. As Murri scholar Oscar Monaghan writes, ‘I cannot separate, nor am I torn between, the queer and the Aboriginal. It is not merely that I refuse to bracket any one aspect of myself whilst working towards liberation and sovereignty; it is that liberation itself demands we confront the sites where oppressions intersect.’ An intersectional lens is a vital tool for understanding what it means to live with more than one form of discrimination or oppression. People who identify as queer and Aboriginal and/or Torres Strait Islander need to be able to tell their own stories, in their own words, and in their own ways. The lived experience of multiple intersectional forms of oppression can often be distorted by singular representations or the tendency to homogenise diverse groups of people.

Colouring the Rainbow speaks to the urgency of Indigenous queer recognition, as Troy-Anthony Baylis points out in his introduction to the anthology. More specifically, Baylis argues, there is an urgent need to ‘unsettle the ways that colonisation has constructed Aboriginality.’ The ‘absence of recognition, discussion and critical discourse’ of queer Aboriginal identities within the ‘western academy’ is problematic, and Colouring the Rainbow is a significant contribution to the robust but still emergent field of Queer-Aboriginal Studies.

Dr Mark McMillan’s essay relates the story of right-wing journalist Andrew Bolt’s racist and homophobic comments about McMillan when he was awarded a Fulbright Scholarship in 2009. McMillan’s story of intersectional oppression should be read as both a cautionary tale and a rallying cry. For every mean-spirited Bolt there must be a courageous McMillan, somebody willing to speak out and remind people that everybody ‘has the right to exist as they are, free from discrimination and harassment.’ Each story and essay in this collection is a timely reminder of the historical and continuing fight for queer and Indigenous recognition. In the words of Elder and HIV/AIDS activist Rodney Junga Williams (1962-2011), ‘I want to be remembered as someone who didn’t shut-up, someone who stood up and faced the fear. It’s always been about people that have no voice, access and equity – ensuring that the Aboriginal voice is heard.’

Crystal Johnson asserts that ‘Freedom is a word of many colours.’ This statement might be seen as a rainbow thread connecting all the contributions. Human rights are still precarious in this country, where those in power are yet to learn what a privilege it is to be free from sexism, racism, homophobia, transphobia and other intersecting forms of oppression. In the words of Laniyuk Garcon-Mills,

Politicians imprison our community, deny funding to rural housing, steal children and land, and disregard police brutality and murder – and yet my Aboriginal family attends rallies to support the fair treatment of asylum seekers [. . .] It’s a disgrace how little understanding exists about the cultures that have thrived on this land for tens of thousands of years [. . .] I want to be part of the force that breaks the barrier.

Colouring the Rainbow should be taught at all Australian universities. It should also be read in the world outside of academia, where identity politics are often weaponised by those with too much power. The authors offer personal and political reflections about what it means to be free, about hard-won gains for individuals and communities, and about the work required to ensure that all Aboriginal and Torres Strait Islander people who are also queer and or trans can claim, embody and enjoy, like Johnson, the ‘true power of being proud.’ 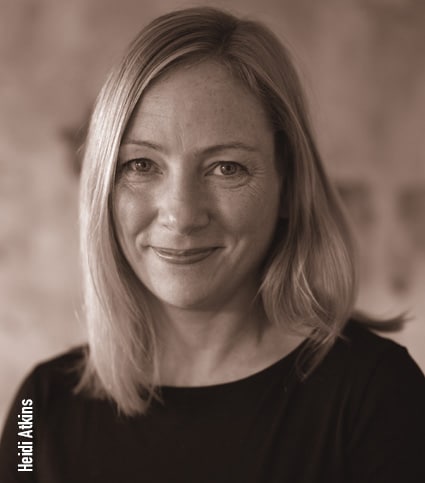 Kate Hall (she/her) is a writer of queer young adult fiction. Her first novel is From Darkness, which won a silver Foreword Indies and a GCLS debut novel award in 2021. She teaches genre studies and gender and sexuality in fiction for young people at Deakin University, on unceded Wadawurrung country.