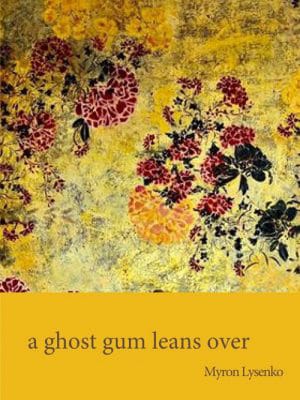 It’s been 17 years since Myron Lysenko’s last haiku and senryu collection. Even so, this new work can be seen as a companion volume to a rosebush grabs my sleeve from 2005.

The titles are clearly related, but a ghost gum leans over is darker in tone, more varied in technique, and contains more poems.  There are, by my count, 280 pieces, and close to 100 pages.

The sheer amount of poetry may seem overwhelming at first (especially to the reader just beginning to read these Japanese-related forms), but the accessibility and humour allows easy entry.  It helps, too, that the book is divided into five sections, with noticeably contrasting moods.

There are superb examples of haiku/senryu on nearly every page, and even a few attempts to alter the shape of the form, particularly successful in the two mother-related pieces in the first section. The second of the two appears as follows:

jumping
sparrows
the
way
my
mother
once
sang

Here, as throughout a great deal of the book, death gives deep vivacity to what is alive. The link between two worlds is an emotionally resonant one. In good haiku, the lines take the reader beyond linear time, and we experience a single moment’s subtle momentousness.

Haiku started out as a kind of humorous verse. Readers familiar with Lysenko’s previous writing will know that his wit is sly, dry, noticeably black at times. Here it is often based around clever punning. We find a chuckle, or at least a knowing smile, in some of the darkest of places.

dementia?
a chance to beat my father
at chess

[p.51] The humour continues through what is the most affecting section in the book: the first. Titled ‘sarcoma’, and beginning with pieces based around the poet’s teenage daughter’s cancer diagnosis, Lysenko’s characteristic understatement ensures the avoidance of getting too close to melodrama or writing that is overwrought:

taxi to hospital
she tells me to stop
telling jokes

[p.9] Here, the poet becomes the joke. This type of self-awareness and humility is present throughout the book, and is one of the elements that supplies the lightness of touch that the original haiku master Basho termed karumi. The rest of the poems in the section are similarly handled, especially noticeable in what are perhaps the collection’s strongest pieces. Those on the theme of romantic relationships, their challenges, ironies, and difficulties. Reminiscent of American poet Alexis Rotella’s work in On a White Bud and After an Affair, they are, at times, achingly honest and brusquely self-disparaging. The sequence is, in a sense, book-ended by the two following senryu:

Valentine’s Day
the toddler listens
as we argue

we break up
just in time
for Xmas

[p.47] Despite being the book’s shortest, the final section, ‘rural’, also contains many quality pieces. Here, we encounter more haiku than senryu. But there is also a new kind of relationship with nature, which is based on hardship and the ruthlessness of both natural laws and human mismanagement:

bushfire
he decides it’s time
for a haircut

freeway –
another kangaroo dead
at the Woodend exit

[p.99] The shorter, Japanese-inspired forms of poetry have come to dominate Lysenko’s sensibility and poetic output in the last two decades. This is reflected in the quality of a ghost gum leans over, as well as the scope of the book. For me, this work places Lysenko at the forefront of Australian hainjin, that is, one of the country’s finest short-form poets. There are far too many great pieces here to reference in a review, so I’ll end with three of my personal favourites.

a plover glides
over the cliff face
my open heart 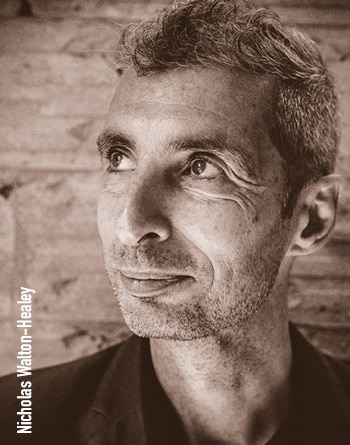 Matt Hetherington is the author of many books of poetry, including Kaleidoscope and The Love of the Sun. He also makes music under the name of ZAZIZ. www.matthetherington.net.