Skip to content
Fiction – An apparition signals the death at sea of a Shetland girl’s sweetheart by Daniel JuckesjasdfjsdfhjwSKJDFJADHGADhsdfbjdfh2022-10-31T23:46:34+11:00 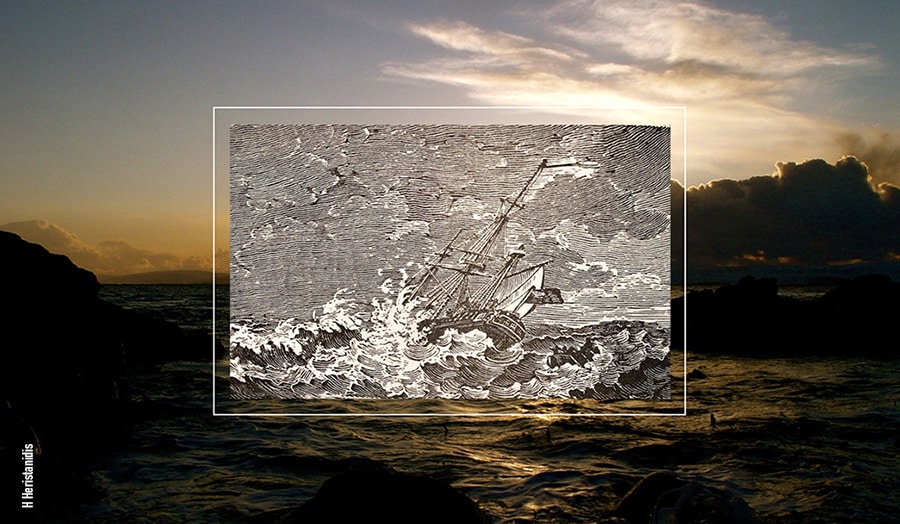 Often he seemed to be passing out of the body into a trance of thought.
Virginia Woolf, The Cosmos.

A door squeaks and a chair is turned upon. A man speaks. His voice—caught between the north and further—rolls within the quiet clatter of the room where he sits, so that his words trail around the space like smoke or ink in water—only to be kept, somehow, by the slow, miracle wind of tape-over-reel. At one point, as the man is talking, a clock chimes through his words like a statement of the obvious.

The moon is over bright—or awful bright—he says once, or said: the fine distinction of tense is lost in his story’s keeping, along with some of the shapes of his words, which fall into mumbles or dialect. As he speaks, it is possible to sense the inconvenience of the wires which wrap around him, as well as the obtrusiveness of the microphone which points towards his chin and throat; there is also the brown, shadowed suit of the drawling, listening man who sometimes murmurs an uncomplicated Yerse in response to what he hears. However, this listener fades as the story unfurls: he seems to know the place he occupies within the intangibilities of the tale, which are wreathed in the bumblebee fuzz of mid-century electrics. Intangibilities—or at least the idea of them—are important, though, and the teller himself acknowledges as much. Midway through his tale—at a point where the shape of a lion walks out of the sea, crosses the water, and looms up to the side of the house from where a girl is watching it come—he says: Now this was supposed to be in reality.

At least it seems as though it was: there is no doubt for the teller of the truth of this story, even if that truth’s particulars could be called into question. But perhaps this is how history works. Carolyn Steedman says it is a form of magical realism, closely connected to stories in which a girl flies, a mountain moves, clocks run backwards, and where the dead walk among the living. And that if all this—the Archive—is a place of dreams, it is one which allows a single dream above all others: that of making the dead walk and talk.

There is a double—or triple—or cumulative—walking and talking which occurs as the man speaks, while the door swings, and when the clock chimes. He conjures himself, a girl, and her apparitions, as well as the space each occupied for the time in which they were embodied. And he does it again, and again, and again: somehow the recording keeps all this within itself and releases it, so that you can hear, when it plays, each cumulation persist.

Well, he says, there were a young woman, and she was sweetheartin’ a young man [Yerse]. And probably it’ll be over a hundred years ago in Shetland [Yerse]. And they made communication between them. And he, says the teller, speaking of the young man, was a seaman: he was to be away on two year. And he was sailin’ on the cost of Australia. And at the two years’ end, when he come home, he intended to marry her—the girl. (The man listening to the story would perhaps have known that this was the hook of it: that the very fact of the story itself implies an ending without this proffered intention. He would have sensed that this first statement was merely one way to uncurl a finger: to beckon.)

So, continues the teller, this time—this two-year period—was getting pretty nearly expired. And he—the seaman—was due to come home close about Christmas, at the two years’ end. And close to that time, the young woman—in words it is not possible to wholly decipher without a knowledge of the dialect spoken—went down to the banks of the town where she lived to fetch a kishie o’ sillocks, and thought she saw something along her side. It, says the teller, was the apparition of this young man.

The young woman couldn’t talk to what she saw, or so he says—She thought to speak to him but she couldna, and the apparition followed her up until she was comin’ up til her gate and then he disappeared. So this young woman, the teller says, was very annoyed about this, and she thought there was something goin’ ta happen til her lover. And she went to bed that night, and she fell asleep, and she sleepeth ’til three o’clock.

I wonder as I listen what she thought would happen next—or, what had already happened. If annoyed is the right word for what she would have felt? I wonder, too, on the darkness of the night, and how the tale itself does not take into account the wideness of the planet and the nature of a body. I wonder on the voice I hear telling. Who says, then, that the girl wakened at three o’clock, and that the moon was shining awful bright, and that she thought til herself, ‘I’ll have to look out through the skylight.’ And she look-ed up through the skylight then, he says; and she lived maybe about a quarter of a mile from the banks—the sea cliffs—where, he continues, she had been when she first saw what she saw. And then, when she looked up through the skylight and towards the moonlight that night, she saw again, he suggests, the apparition coming right up the town.

It is now, in the recording, that the clock chimes—while the apparition moves—and while the teller speaks through its quarter-hour toll without stopping. Though his words, as he does, are muffled by the echo of the peel, and both sounds share for a time the precise alignment of particles held on the reel and in the cloud. As the chimes fade, he says the apparition came, until it reached the girl’s door and gave it five knocks—then his words trickle off. Until the girl, he continues, was at the skylight, lookin, and she saw it comin up o’rer and she drew back. And the face o’ this young man was on the skylight then. The man who she had last seen years before, who had promised her enough to make this tale worth keeping.

And then she sayed, ‘Oh God surround me an’ all, it’s going to happen this night.’ But then, with that it was through, and the apparition went down fer the banks. The girl, the man says, followed then, and says, I’m goin down fer the banks—and so she did. Where, by the water, she saw the apparition pull a boat out onto the waves, where it touched—he touched—the boat five times, until down she went with a plunge and him along wi’ it. And then, says the teller, this lion walk-ed up. He walk-ed outa the sea and he walk-ed the shore and he come up the same distance as the first way’d she saw this man and right uppa the house. And she shot her head up through the skylight—she is back now, somehow away from the water and under her roof again—and, he says, the lion come up right to the side o’ the house—and this—he continues—this was supposed to be in reality.

The girl, he says, spoke to the lion. She asked, ‘What do you want?’ The lion says in return—says the teller—‘I’m come,’ he says, ‘to tell you’ he says, ‘that you saw that sight, and you’re very very frightened.’ An’ he says, ‘you heard,’ he says, ‘that five knocks,’ he says, ‘that the apparition give at your door, and that was your lover.’ The breath of the girl in the night air curls. And, says the teller, voicing the lion again, ‘I’m being sent,’ he says, ‘to tell you it’ll be five days yet a’ you’ll get his dead news.’ And, he says, ‘the ship an’ all hands, there’ll be a great storm that’ll come on, and the ship and all hands’ll be lost.’ (They already must have been lost at this point: it is merely word of the storm being waited on that was signalled by the lion. As I listen, this time-peculiarity bothers me.) Then, says the teller, he says, ‘He loved you so well’—and more, in a dialect I cannot split into syntax, until—he finishes: ‘He wanted to see you before death.’ And that ends the story.

And that ends the story. Then the voice of the man swings shut, and there is nothing left once more of the girl and what she saw: all—he and her and it—are swallowed by language, by tape, and by time. Until perhaps the aching squeak of hinges and the re-beginning of the tale, and what Steedman terms amazement at perpetuity itself; at the marvellous continuity of things.

*This piece borrows substantially from, among other things, an oral history recording with the same title: ‘An apparition signals the death at sea of a Shetland girl’s sweetheart’. The main voice in the recording—that of a storyteller telling a folk tale of the Shetland Islands—belongs to Brucie Henderson, who lived from 1891 to 1977. The recording was made on the isle of Yell, Shetland, in 1955, by Calum Iain Maclean. It is kept by Tobar an Dualchais/Kist o Riches at this link: http://tobarandualchais.co.uk/en/fullrecord/31946. 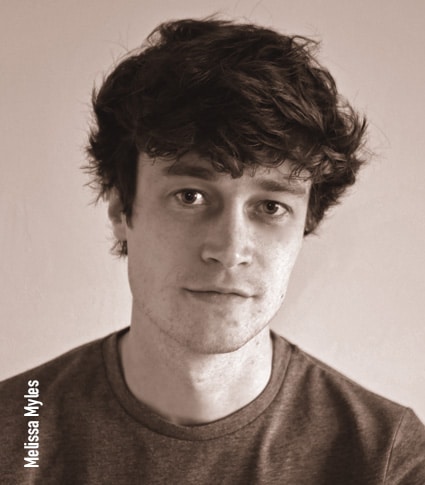 Daniel Juckes is a writer from Perth, Western Australia. He is a lecturer in Creative Writing at UWA, Associate Editor at Westerly magazine, and holds a PhD in Creative Writing from Curtin University. His creative and critical work has been published in journals such as Axon, Life Writing, M/C Journal, TEXT, and Westerly, and he was highly commended in the 2021 Fogarty Literary Award.