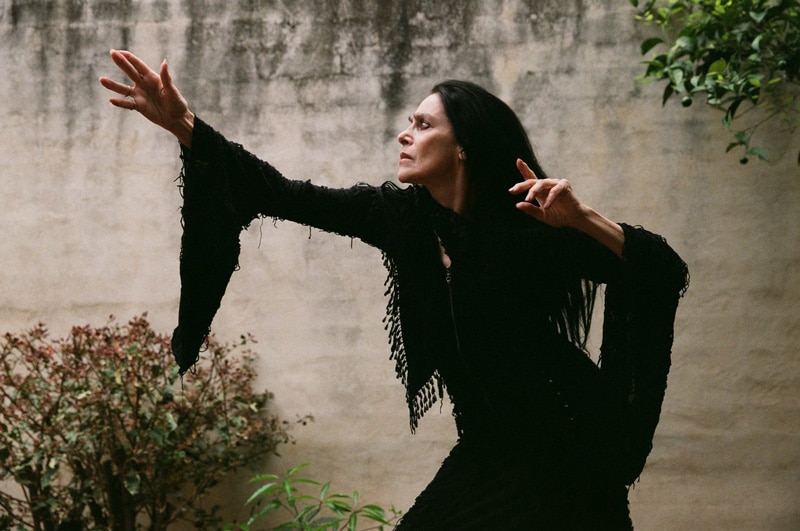 ‘I am the scourge. I am the Holy Fool. I am the shit of God.
I am the sign. I am the plague. I am the Antichrist.’
The Divine Punishment by Diamanda Galas.

I have always been drawn to wild women. The wilder the better.
I call them Bacchantes, female followers of the god Bacchus who tear apart King Pentheus when he interrupts their nighttime revels in the forest. Nowadays such women are called ‘strong’. To me this epithet evokes images of a gun-toting dame in a scant outfit, something tawdry, dreamed up by Hollywood, an adolescent fantasy.

Nina Hagen is a Bacchante. So is Grace Jones. But Diamanda Galas is in a league of her own.

Galas is not a singer in the conventional sense; don’t expect her to warble pretty tunes, though she can probably do that, if asked—nicely. An accomplished pianist, she is a vocalist who performs startling calisthenics with her voice, using it like a musical instrument and almost overwhelming accompaniment.

The first time I heard her sing, I thought of Peruvian soprano Yma Sumac or Egyptian singer Uum Kulthum. Then I dispensed with both and thought of no one else but Diamanda Galas. Her voice is unique. It cannot be mistaken for someone else, so startling is her primordial, four-octave vocal range. She is a sorceress whose unearthly guttural wail evokes pictures of volcanoes erupting, howl of the banshee in the desert, and the coming of damnation’s minions. Melding talent with personality, she is a force of nature.

‘My voice was given to me as an instrument of inspiration for my friends, and a tool of torture and destruction to my enemies. An instrument of truth,’ she says, true to style.

Born in San Diego to Greek Orthodox parents, Galas is one of those strong-willed women Mediterranean cultures spit out at regular intervals—Greek opera singer Maria Callas was one, as was Italian actress Anna Magnani.

Galas has the shrewd, pragmatic attitude of someone who was raised on the streets and who has witnessed life’s realities early on. Like the gift of voice, her intellect is innate and her defiance of social and political injustices reflexive.

Although her parents encouraged her gift for piano, they were not forthcoming with praise for her singing. Her father, a talented musician, believed singing was for ‘hookers and idiots.’ That didn’t stop Galas from studying a wide range of musical forms. Opera, jazz, blues, as well as performance art at the University of California. Life experience, which later informed her work, came in the form of petty crime on the streets of Oakland. She hung out with gays, drag queens (she was known as Miss Zina), and took every drug under the sun. Fortunately for the world, she realised she was a better musician than a criminal.

‘I don’t see one as being better than the other,’ she explains. ‘I think I found a successful interface between the two…’

Her identification with outcasts and misfits was nurtured when she and her brother, the poet and playwright, Philip Dimitri Galas, steeped themselves in the philosophies of Baudelaire, Sade, Artaud, Nietzsche, Poe, among others. ‘All my work is central to the image of a person being crucified or burned at the stake. When people go into a church,’ Galas adds, ‘they see the nice cross… and say that Jesus Christ was a good man, but I approach it from the position that Jesus was an outlaw.’

Like the writers who informed her, she stands outside the social norm, accusing, challenging and exposing the social underbelly.

Galas asserts that her music must combine aesthetics with every-day political relevance. She made her first live appearance in France in 1979, and toured European festivals with her solo works, ‘Wild Women with Steak Knives’ and ‘Songs from the Blood of those Murdered’. The latter is an astounding malediction directed against the far-right military junta that ruled Greece between 1969 and 1974, and is dedicated to the rebels who died protecting free speech and democracy. It was with this piece that Galas first developed her unique style of the Greek mountain song, echoing the centuries-old dirges sung by women over their dead.

True to the liturgical quality of her work, her first record, ‘The Litanies of Satan’, incorporated passages from Baudelaire and the Bible. But it was two years later, in 1984, when she released ‘Masque of the Red Death’ that the world paid full attention.

With this album, and against the advice of colleagues and fellow artists, Galas raised a harrowing jeremiad against the hypocrisy, misinformation and suffering surrounding AIDS. ‘In the face of that level of resistance to my intuition, that attempt to sabotage my vision, I’ve had to say, “The Mike Tyson of the voice does not waste time talking about bullshit,”’ she says of her decision to speak out for the dying.

Her gambit paid off. Galas was signed by Britain’s Mute records. Label mates include such icons as Nick Cave and New Order. At Mute she wrote and recorded ‘The Divine Punishment’. She is quick to point out that this album is not about AIDS. It’s about ‘a basic dilemma—the feeling of powerlessness, the concept of quarantine and scapegoating…’

It was at this time that her beloved brother Philip developed full-blown AIDS and died. Drawing inspiration from pain, she responded by writing, ‘Saint of the Pit’, which was followed by the final part of the Plague Mass trilogy, ‘You Must Be Certain of the Devil’.

Winner of Italy’s prestigious Demetrio Stratos International Career Award, Galas’s highly charged performances on the Plague Mass albums is a strong antidote to the mawkishness espoused by celebrities desperate to join the AIDS moment. Alongside Derek Jarman’s final film, Blue, Galas is perhaps the only truly artistic voice that transcends a contemporary medical dilemma to join the universal ranks of human suffering and redemption, equal to plague responses from Leviticus, Swift and Defoe.

In true pop culture form, she combines vocal ability with flamboyant theatrical appearances. Images from her concerts often show her crucified, half naked and covered in blood. Paradoxically, her presence evokes the taint of medieval cathedrals, martyrs and dominatrixes. Flames lick the stage as she rasps and hisses like something out of Carrie.

But call Galas a goth and she’s likely to spit on you before cursing your lineage. If gothic means Edgar Allen Poe, she says, or nineteen-century symbolism, that’s fine. She bristles at being compared to ‘a bunch of bored kids dressed in black worshipping death. I’m not interested.’

My identification with Galas rests partly on geography. We share a Greek-Turkish lineage. Her mother’s ancestors are Maniates, while her father’s side of the family come from Alexandria in Egypt via Smyrna, modern-day Izmir in Turkey. I also see connections between her music and my gothic fiction. In a perceptive review of my book The Door and Other Uncanny Tales, poet Dean Kalimnios calls the stories ‘Balkan bleak’, linking them to Eastern European suffering and hardship in a long history of war and occupation. The term is perfect for Galas’s work too. Far from being indulgent, she teaches harsh life lessons often glossed over by contemporary life.

Describing herself as an ‘Anatolian’, Galas reminds me of the brassy women who brought me up on Tenedos, the rocky Aegean island where I was born. A strong feature of these archaic cultures is the notion of vendetta, where an insult against the family name gets you ‘a knife right up the fucking ass’, as Galas colourfully puts it. Crimes such as rape or molestation, for example, are quickly resolved by public humiliation and punishment, sometimes even castration.

Like many villagers, Galas has a purely utilitarian view of life and heaps scorn on ‘feminist weep sessions’. She has the attitude of street-wise European working-class women who deal with problems on their own terms, instead of running to grievance committees. ‘I’m not interested in simple-minded notions of feminism… I’m thinking in terms of getting the job done effectively. Getting to… the root of the problem, rather than whining about it,’ she concludes, suggesting that a meat cleaver is a better way to deal with a rapist than counselling. High-flown rhetoric or not, the remark echoes the boldness of her music.

Now in her mid 60s, Galas is not resting in her crypt. Responding to COVID-19 with the ‘Broken Gargoyles’ sound installation at The Kestner Gesellschaft at the Nikolaikapelle in Hannover, Germany, she shows that she is still tuned in to the times.

Using two works by German Expressionist poet Georg Heyms as a starting point, she paints the ruinous chapel in blood-red light and allows her voice to emanate from the walls, linking Heym’s historical themes of suffering during World War I and from yellow fever, with the current pandemic.

Listening to it on an Instagram post, I was reminded of the cries and whispers coming from the ramparts of an English castle in the 1972 BBC ghost story The Stone Tapes. Like that cheap but highly effective film, ‘Broken Gargoyles’ mixes high and low and balances dread with tenderness in an atmosphere reminiscent of Hammer horror movies.

With her operatic handling of themes such as isolation, abandonment and raw sexuality, Diamanda Galas is an antidote to much of what passes for art and advocacy today. She’s not a nice girl. She’s the Maenad in the cellar of suburban repression and denial, bringing a synthesis of ancient choral music, poetry, theatre, black gospel, jazz and experimental. Her identification with the romantic sexual outlaw and her kamikaze-like political tactics puts her at the vanguard of new music and the cult of flamboyant personality.

Dmetri Kakmi is the author of The Door and Other Uncanny Tales and Mother Land.